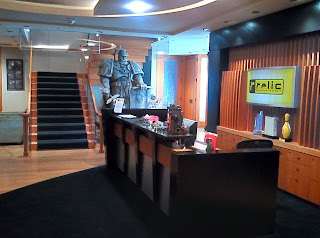 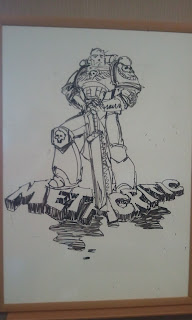 But... If I have to tell you my own perspective... Nothing really happened. It went they way it probably had to. It was the company's first big console title, it was the company's first third-persons action shooter, the first multiplatform game. It started from zero and it was pitted against one of the biggest franchises ever (and I'm guessing here but I'd bet... spending less money to make it, and much less to market it for sure). Moreover, it intended to be a Hollywood production made by people who were really well known for their indie-art titles.
There were mistakes, sure. There was plenty of overtime.... Could it really have ended much differently? With the same people, the same culture, the same resources and amount of support I would say not.
You can see Relic behind Space Marine... I'm not a fan of the genre but I can tell that the core gameplay is incredibly well done (and remember, company's first shooter!). I had fun with the multiplayer, and I don't play multiplayer! And the rendering is much more accomplished than it seems, and its consistency really surprised me. The amount of features these geniuses managed to cram in the development cycle of something that basically started from scratch is amazing. What it lacks its the production, is the depth and breadth.
Anyhow it doesn't really matter, and surely what I write on the argument does not matter. I'm sure that Relic will make new and really great games, the ones I saw in development are... exciting, really.
Unfortunately, they are not the kind of projects that I'm personally, for my career, needing, and there was nothing I or them could do about that obviously. We just become not matched for each other, and it sucks, but it happens. Goodbye and best luck to all Relicans and be proud of Space Marine!

I would say Space Marine could be a great game but weak story, too linear gameplay without any tactics, lack of details, weak voicing(W40K:DOW has much better voicing), disbalance in late levels, final boss killed it. But it has potential at least.

Wow, that was quick... Good luck with your future endeavours!

Lol MaciejS, I just noticed that you were among the first to comment on my "leaving EA" post too :) Yes, it was "quick" but if you follow the game industry (I don't usually) then you might have noticed some recent trends... Long story short, I don't have faith in THQ and in its plans, so not only I didn't love the current situation but I didn't have much faith it will go towards the direction I personally wanted anytime soon. That's not to say that Relic won't keep going on and ship great stuff, I believe that will be the case, but I didn't have faith it will work on stuff that I personally would love to work on.

You said "And the rendering is much more accomplished than it seems". Can you elaborate on this more? I've come across many fellow programmers that have similar comments, what prevented SM from showing off the rendering to it's full potential?

Well, first of all the best rendering is the one that does not obviously show its effects, so there are tricks that are quite unique in the code that will probably always remain secret or so. And that is good... We made an engine that moves quite a large world (and a large number of effects and particles...) it's pretty competent when compared to the state of the art and that alone is quite a feat for our first console engine. That said, it could have been even better, sm production was not super smooth to say the least and we probably packed more features than we even needed or had the experience to be able to use at their best. It could have in my opinion looked even better with less, and it could still move even more stuff but in my eyes its in absolute value very competent and good looking, and all things considered a great accomplishment.

Also... Look at the screenshot in the post. Not bad at all... And if you are a renderer with a very crtitical eye you could maybe spot a thing or two... Or maybe not. But one problem is that its not always consistent (in terms of quality, not framerate) and that happens usually because of production issues and lack of experience. I think SM is an amazing foundation, at its core it could rival any other game (even if its real core... Well but I digress) but we didn't manage to build a product on top of that core that is really as epic as we should and wanted to

And this is why I try to keep up with your blog here and it's a very important point for anyone doing outward-facing work like rendering or GUIs. Best of luck to you!

Hi, just found your blog via last year's Skin post you made. What do you think of Jimenez's work? I'm not a graphic programmer, but I'm reading and researching it to learn more and I found a few of your posts interesting.

Good luck with all really

I don't know, I didn't delve into the sourcecode and there is no published technique out. The video looks good but really who cares? Techniques are useful tools in our libary, and each and every is useful (or almost). Understanding what we need when is the key.