DXOLabs is a company devoted to digital camera and lens testing software. Their DXOMark is a standard for lens testing, and they surely know their business.

So you might imagine that when you read an article on a well respected website, as Luminous Landscape is, that tells you that your loved (and expensive) digital camera is cheating you, it's something to worry about.
The article is "An Open Letter To The Major Camera Manufacturers" by Mark Dubovoy. The thesis is that the digital sensors, having the photosites somewhat inside a "tube" are shielded from some of the peripheral light rays (think of a honeycomb grid on a flash), so very fast lenses hit this limit and become "darker". Thus the camera manufacturers hacked the problem by silently raising the ISO sensitivity with such lenses.

This is interesting and so on, but it sounds strange. The graph they gave Dubovoy seem to depend only on the f/stop and not on the design and focal of the lens (latest data is here). If the problem is the angle of the light rays, wideangles should be more affected than tele.

Anyway, I had to test. So I bought a 85mm 1.2 and did some shots. I first replicated the test I saw here, checking that the aperture does indeed change the shape of the circle of confusion, but how do we know that the full-open aperture is indeed as wide as it should have been? Well, I did a simple test, just shielding the lens contacts with some tape so the camera does not recognize it anymore. Result? Same brightness (even if I didn't shoot the images exactly at the same angles due to the fact that I had to move the camera to patch the lens), surely not the half EV drop that dxomark predicted.

Note: that doesn't mean that indeed there is or could not be some light loss (albeit it would be easy to measure for your camera, just compare the image exposed to a given stop via shutter speed versus the same done by opening the aperture, on a taped lens), but that, at least for my camera, there seems to be no ISO cheating that I could detect. 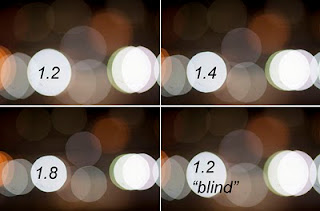