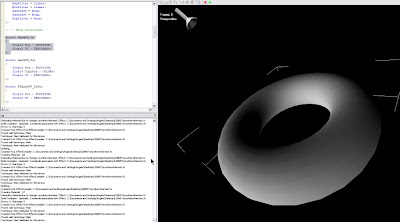 Anyways I've finished the very first sketch in FXComposer of a nice-ish idea I had to compute smooth normals on a surface, when you don't have them (HINT: that might happen because you're displacing the surface with a non differentiable function for example... that might happen if you're computing that function using numerical methods...)

You probably won't be able to see anything intresting in the attached screenshot, but as I said, it's late, so you have to believe me, it's kinda cool, and I think it could have various uses... If it turns out to be a good solution, I'll publish the details :)

hello, I have a friend who's master's thesis was about surface reconstruction given a 3d point set. He would calculate the normals and sort of average them, he did a pretty cool job, lemme know if you want more info.

Intresting, but it's pretty different I'm afraid, usually those kind of reconstructions resolve the surface topology via some kind of distance measure, converting sparse point sets in relations between points. What I'm doing is differnt, I have some kind of relations, as I'm rendering a mesh, but I don't have direct access to them, as I'm not using geometry shaders. Everything is done on the GPU, and it's pretty simple and very fast too.