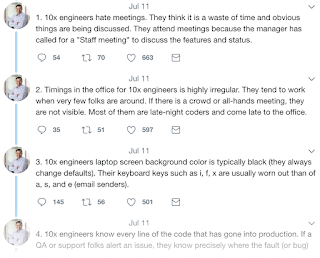 It's a long thread and I censored the author's name because it doesn't matter and I don't want to add to the hate that already naturally happens on any social media these days.
To be honest, I'm still not entirely sure it's not just a parody, but I think it isn't. Regardless, it seemed a good excuse for a blog post.

What's wrong with a description of a "10x" engineer like the one above?

I hope it's obvious but I'll spell it out. It tries to describe an engineer not in terms of the work they do, the actual output and results, but in some kind of mystical terms.
Like you can infer people's skills by looking at how they dress, what they eat, what time they come to the office and so on.

It doesn't help that the attributes this person uses as signals for a "10x engineer" are all kinda on the introverted side of the spectrum, to be charitable, as introversion per-se is a test of some kind of smartness. It's close to the old Hollywood trope of the computer guy being a weird, overweight, sexually frustrated white guy.

Ok, now that we closed the chapter on the critique of random people's tweets, let's get to something more interesting...

Do "10x" engineers even exist? What are they? And what makes them?

Let's start from that last one.

What's a 10x engineer? Typically we think of "10x" engineers as people that are much more productive than the average when working with code. Code "wizards", "ninjas", "rockstars" or whatever else cringe-worthy moniker teenagers use.

In my experience, 10x engineers do exist. Even controlling for seniority, knowledge, and skills, productivity is not uniform among people. I hope this is not controversial, one can know something, be even experienced in doing a given thing with a good track record, and yet not be as effective at doing it as others.

Should you hire only "10x" people? Definitely! Sort-of. In a way... We all look for excellent people, of course, and being able to distinguish good from great among a given seniority level is certainly important.
That said, there are lots of ways to be excellent beyond coding. In a decently-sized team other aspects might even be more important, mentoring, coordination, project management and so on. As things grow code usually tends towards being an implementation detail, so to speak, secondary to product and people concerns.

Lots of things in which you can be "10x" - but still, the concept of productivity being separate from skill generally holds.

These multipliers are also of the hardest to assess in interviews because again we're saying it doesn't correlate with simply what a person has on the CV or their ability to answer technical questions. Correctly characterizing where this productivity comes from is thus of utmost importance.

Why are some people more effective than others, given the same skillset? Where does that effectiveness come from? Is it their choice of editors? Their typing speed? Some sort of flow-related supernatural focus? I think not.

Skill is knowledge and experience, what we usually mostly correlate with seniority levels. As an analogy, I would say this is the value of the chips you have, at a gambling table.

Effort, given the same workday, is mostly focus. It's a time management skill, the ability to execute your tasks in good-sized chunks. In the gambling analogy, this would be the number of chips you have.

Focus is partially environment-related, but what we don't say often enough is that a lot of it is a skill. A lot of it also relates to how much a person likes doing a given thing, how fit he is for the job at hand. Effective managers that try to hire and allocate people to do the things they are passionate about, can thus help to get the most from the effort multiplier.

The last aspect, what I called allocation. This is how you spend the chips you have. Second hypothesis: correct allocation is what "makes" a 10x engineer.

In other words, we all have a number of chips to spend each day on our tasks. And controlling for seniority levels more or less effectively capture this number, there isn't that much variance in that.
The part that has a lot of variance is the allocation. Not in what to do, as in prioritizing this bugfix to that feature (even if such skills are also fundamental and have very high variance we capture them well in job categories, think technical director versus principal engineer for example) but how we do things.

Do I use a scripting language, should I implement things in C, or maybe I should learn that fancy new language everyone's talking about? Do I rely on a library or write from scratch? Do I need to understand the overall architecture of this software? Do I need to understand the specifics of the functions I'm calling? When it's appropriate to be sloppy? Should I jump into prototyping or I need to learn about the state of the art first? Should I go deep or wide?

We always have a limited amount of resources, ability to keep things in our brain, of doing work. And software design has a lot of different dimensions, abstraction versus specificity, generalization versus integration, high-level versus low-level concerns and so on.
The ability to navigate this design space and selecting the right tools for the job, both in terms of concrete artifacts (code, libraries, languages, IDEs) and of abstract methodologies, makes a huge difference. One thing is to know about things, the other is to be able to critically evaluate tradeoffs and allocate (your) resources well.

Third Hypothesis. The reason why "10x" skills look mystical is that we don't have a solid theory for allocation choices.

When we have a design space that lacks a solid theoretical framework to navigate it, all success looks random, unteachable, and mystical. This is why "10x" engineers are both rare and sometimes described in horrible ways like it was done in the twitter thread above.

Too much of programming is still an art, eventually some people "get it" after lots of exercise, but we don't really know how to replicate that success.

We accept that somehow of the huge talent pool of software engineers, some will somehow find a way to be productive at some things, and some will be less successful.

Update: I was made aware of this, which is a much more concise way of vehiculating the same message: