Interviewing candidates is undoubtedly a tricky and important task for a software company who is seeking for new talents. Books have been written on the topic and while I can't call myself an expert, I do have been through the process enough times, on both ends, to have at least a good opinion of it.
There is a lot to talk about and things are different depending on if you're looking for a junior or a senior, also, a lot has been said already by people which are more competent than I am, so I would like here to focus on my personal experience as an applicant to senior/lead rendering roles, and the mistakes I see more often in the process. It's going to have some rant-ish undertones :)
In my opinion, two are the main problems to take care of:
Don't waste time.
Who would you rather employ? Someone who's working, has lots of competing offers, and little free time, or someone who things spending a days on your coding test is the most exciting thing happened to him that week? You want to hire the busy people.
If you applicant has three companies which are interested in interviewing him (and even in this economy, you know well that for seniors it will happen), who do you think he will try first? The one that lets him a technical interview the day after, or the one which asks for a long test for pre-screening?
Of course your engineers are busy too and pre-screening is effective in reducing the time wasted, but be reasonable. And differentiate between juniors or newly graduates which would probably have more time on their hands and fail more often, and seniors with years of experience. A one hour test is ok, a day long one, not so much, more than that and you'll start risking to be ignored or considered last.
This though does not apply to pre-screening in general, it applies to everything really. Get to the point. Yes, warm up questions might be useful if your applicant seems nervous, but there is really no need to start with things which won't get you any useful information, if you want to chat start with more colloquial questions instead of going straight to equations or code, and bring these to the table after the more loose conversation on a given topic.
A lot of the time waste though comes from not creating different interview paths for the different engineering positions, which also brings me to the next issue:
Show some effort.
Who would you rather employ? Someone who is in love with your company or someone who wants proof that you're worth his time? An interview is usually the first point of contact between the applicant and your company. And you should assume that he is there all the time analyzing you, he's evaluating you at least as much as you are evaluating him.
I never, so far, applied to a company for which I was absolutely persuaded I wanted to work with them when I applied. There are some games that I really would have loved to make, but I find impossible from the products a given company does to understand how working for them will be, and I suspect a lot of games I love are not made in environments I would have loved to be part of.
There are certain persons who fascinate me and who I would like to work with, but still, every time I interview I'm interviewing the company at the same time.
Put some effort, come prepared, don't waste my time. I have been asked questions which made me seriously doubt the kind of job they were interviewing me for (like once, when my whiteboard math question was about computing the distance between two points...), I've seen questionnaires with errors in them, and have been asked the same "tricky" algorithms over and over again. Nowadays, if someone asks me about polymorphism in C++ and the "virtual" keyword, it's an immediate flag that I raise.
Virtual functions? Distance between a point ad a line? Dot product? But, I hear you say, you would be surprised to know how many technical directors can't code. No I won't, but are you seriously going to think "oh, finally, a lead that knows virtual, let's hire him".
What are you asking? Is it relevant even or are you just wasting time? Seriously you can't think of a simple function to write, or problem to solve which tests all of these things and more?
Be original! Reversing the words in a string? The building and two eggs "google" problem? Finding the missing number in a sequence? Do your homework, are you going to test if your candidate studies the list of the ten most common interviewing questions, or if he has a working brain?
Even simple variants will do better. The distance between a line and a circle instead of a point. Same thing but it avoids the mechanical "go to my dictionary of ready-made answers I've studied the night before".
There are plenty of simple problems you can invent which can expand in all sorts of interesting directions, craft a few, unique for your company, for each engineering level, and maybe change them every few years.
P.S. So are there companies which did it "right"? My best experience so far was with Sony Santa Monica. Original, effective and required little time, showed effort and respect, which is not surprising knowing how smart Christer Ericson is... Crytek was also good I have to say, I rate it second because the process required way too much time, but talking with Ury Zhilinsky was awesome. The worst ones? Probably left me so unimpressed that I won't remember the companies.
6 comments:

Email ThisBlogThis!Share to TwitterShare to FacebookShare to Pinterest
Etichette: Rants, The industry

There are quite a few bookmarking services on the web today, and I never felt the need to find one until Google shut down its handy reader share feature. So, kinda randomly I picked Zootool and I've been working on sharing some links for a few weeks, so now there is a bit of content and I can publish its feed. Let me know if there are problems, otherwise I'll stick to this one to share my finds in the "rendering et al." category, at least until Reeder does not add support for Google+ :)
http://zootool.com/feeds/user/c0de517e/type:all
3 comments:

Email ThisBlogThis!Share to TwitterShare to FacebookShare to Pinterest
Etichette: Announcements

Every now and then, I look around for prototyping frameworks for my rendering work. I always end up with very little but maybe I'm too picky or too lazy. Here are some I've found:

Stuff I actually use:
Seem promising:
Some other alternatives:
11 comments:

Email ThisBlogThis!Share to TwitterShare to FacebookShare to Pinterest
Etichette: Tools

For some reasons, videogames and photography are more linked that people might suspect. In my career I've noticed that many if not most of the top engineers I know, also dabble quite a bit in photography (well, I'm biased as I'm a rendering guy and my friends tend to be in the rendering circle). That includes myself (NFSW). But there is more...

Some notable videogame photographers are Robert Overweg, Duncan Harris (Dead End Thills), Francois Soulignac and Iain Andrews, but I'm sure there are way more out there, if you have links to share please comment on this post.
Robert's work focus on exploiting the limits and bugs of games to create artistic fine art series (which is not uncommon either), while Dead End Thills and Iain Andrews are more "conventional" screenshot artists: games get hacked to gain more control or improve quality and the end results are quite amazing!

Professional photographers also dabble in the media time to time. Of course, the main attraction seem still to be the players, and not the games, as in these series by Phillip Toledano and Robbie Cooper (also here), but there are examples of photographers leaving their cameras for the PC to record for example this Skyrim timelapse (was this inspired by a similar video on Eurogamer? or viceversa?) oe using videogame equipment in their photography.

Videogame references is photography are of course countless, like this fashion editorial in Neon Magazine.

Lastly even gamers are becoming photographers, not only in games that specifically feature this profession in their characters (Fatal Frame series and Beyond Good and Evil come to mind but I'm sure there are more), but by twisting game rules.
Virtual war photographers enter multiplayer shooter games with the intent not to kill but to report (and not die), like Brunet Thibault (who also enjoys other forms of videogame photography). There are staring to be quite a few examples of this, which is probably going to piss the other players though, it would be great if modern FPS started to support this option (spectator modes are sort-of there, but you can't die and thus don't really "simulate" the role, there is at least one game that is all about war photography, but it doesn't seem on the contrary to allow other roles, so it's still not quite the same).

A notable game which supports photography (and fashion!) without being centered on photographer is Second Life. These guys go so crazy that they actually photoshop their work! Eve Online is another game worth mentioning, not only its avatar creator is amazing, but taking your avatar picture puts you in a (simple) virtual photography studio and the results are fairly decent.

If only Red Dead Redemption or Alan Wake could get more love... Unfortunately being console only titles (I still hope for an Alan Wake on the PC), they lend themselves less to photography, but at least for the former there are a couple of amazing videos out there, including a short film made by John Hillcoat...
1 comment:

I was thinking to publish this somewhere else, but Crytek at the last Siggraph already disclosed a technique that is close to this one, so at the end I guess it's not worth it and I'm going to spill the beans here instead.
Depth of field and motion blur, from a post-processing standpoint, look similar. They both are scattering filters, they both need to respect depths. So it makes sense to try to combine both effects in the same filter. And if you think about doing it that way, you're almost already done, it's quite obvious that it's possible to combine the DOF kernel with the MB one by skewing the DOF towards the motion-blur direction. 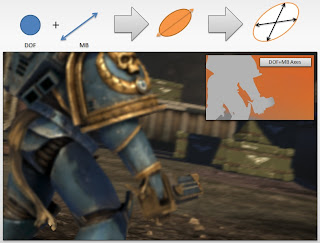 This video, by a Bill Dally (NVidia) about chip architectures is so great it deserves its own post: http://mediasite.colostate.edu/Mediasite/SilverlightPlayer/Default.aspx?peid=22c9d4e9c8cf474a8f887157581c458a1d#

It probably will tell you thinks you already know, but even if it does, it's worth to see it.
3 comments: