Update: There are now at least two tools that do this properly and seriously. This was never a serious BRDF tool, but if you landed here you're probably interested in one. BRDFLab and Disney's BRDF visualizer.

I've just learned from the Real-Time Rendering blog, that Torrance died a couple of weeks ago. Can't be a better time to write a BRDF visualizer, that is something that I always wanted to have handy in order to really understand what's going on with different shading models, and approximations.

So today I tried to write a simple vertex shader to visualize and compare shading models. I thought that visualizing them in the BRDF form would be nice (something like this). Also, I wanted to write this not using Nvidia FXComposer (shit).

So I went on a quest to find an FXComposer replacement. It's not the first time I try and fail at that. This is what I found this time:

Media Player Classic: Off-topic, but it was surprising for me to find out that the latest version does support HLSL shaders, and you can even edit them while the movie is playing. It's cool and I think I'll put this to a good use to prototype post effects and colour correction.

QShaderEdit: looks nice, it's inspired by the Apple OpenGL Shader Builder, with CG support added to it (GLSL is really ugly). I didn't try it as it's source only, and something tells me that it won't compile so easily with Visual Studio. Also it looks like it does not support scripting.

glslDevil: it's not an IDE, only a debugger, and only GLSL. So overall it's useless for my purposes but as a debugger it really looks nice. There is a windows port, so I'll try it some day.

Lumina: GLSL only, but supports scripting. There is a windows port but the whole project looks discontinued. It's a shame as it seems to be very decent. Maybe someone should pick this up.

PyOpenGL_Lab: hooks OpenGl to python, plus it provides some utility functions like camera management. It's the slimmed-down version of GeeXLab, that I tried and found to be really messy. Overall it looks decent, but no CGFX support and as is, it's not so much better/faster than writing your own testbench in C#/SlimDX. Python seems to be the scripting language with the most wrapper libraries. I even found a Cuda and an OpenCL binding for it.

In the end I went back, frustrated, to FXComposer (1.8, I use 2.5 only where 1.8 crashes). This is the result, just attach it to a tessellated sphere and bind the LightPos parameter to a point light. 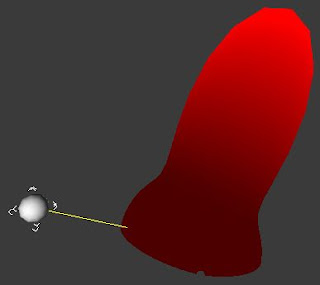